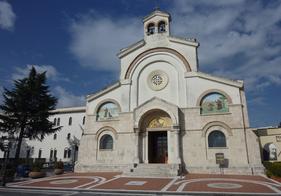 This evening we board overnight Trans-Atlantic flight from New York Metro Area to Italy. Meals aloft. Airport, time and flight number to be announced.

A morning arrival in Italy. After baggage claim and customs formalities we meet our driver and transfer to San Giovanni Rotondo. Along the way we will stop for lunch. Upon arrival and check-in at our hotel there will be some time to relax and freshen up. We will re-group later for a walk to the Shrine Church for a brief visit and a short orientation of the village before supper. Supper (included) and overnight will be in San Giovanni. (S)

After breakfast we will begin with a guided visit of the Shrine of Saint Pio, the Gallery (museum) of St. Pio, Casa Sollievo Soffrenza (Hospital) and the historic center of San Giovanni Rotondo. Tonight supper (included) and overnight will be in San Giovanni. Mass will be offered, time to be announced. (BS)

Today we will have a full day's excursion to Monte Sant'Angelo. This quaint village made holy and famous to Christians by Saint Michael the Archangel who appeared here in the 5th Century for the conversion of pagans. It was also the site from which the Crusaders came to pay homage before their departures to the east. We will visit the Grotto of Saint Michael the Archangel, a pilgrim site since the 5th Century. Mass will be celebrated in the grotto. There will be some free time in Monte Sant'Angelo for lunch and browsing. Return for supper (included) and overnight in San Giovanni (BS)

This morning after breakfast we depart for Rome. Along the way we will stop in Pietrelcina,

in the Province of Benevento, birthplace of St. Pio. Pietrelcina is a small picturesque town

made of winding streets, characteristic homes, and beautiful gardens. There are ancient

signs of its remote origins and of places that recollect the birth and life of the Holy Monk.

and places that influenced his life. A late afternoon arrival in Rome for supper (included) and

overnight. (BS) Mass will be offered, time to be announced.

This morning we begin our full day visit of Rome. The Four Major Basilicas of Rome: Saint Peter's (Vatican), Saint John Lateran, St. Mary Major and Saint Paul Outside the Walls and a brief visit to the Scala Santa (Holy Stairs). We will also visit an ancient Catacomb, burial place of the early Christians. Supper (included) and overnight will be in Rome. (BS) Mass will be offered, time to be announced.

This morning after breakfast we will head northeast of Rome to the beautiful city of Loreto. The Holy House of Loreto is one of the most revered Marian shrines in the world. Since medieval times, the Holy House has been believed to be the very home in which the Virgin Mary lived, where the Annunciation took place and raised the young Jesus. Three centuries after the life of Jesus, the newly-converted Emperor Constantine built a basilica over the humble brick house believed to have sheltered the Holy Family. According to Catholic tradition, the Holy House came under threat during the turmoil of the Crusades, so in 1291, angels miraculously translated the house from its original location to a site in modern-day Croatia. An empty space was left in Nazareth and a small house suddenly appeared in a field in Croatia. The bewildered parish priest, brought to the scene by shepherds who discovered it, had a vision in which the Virgin Mary revealed it was her former house. On December 10, 1294, the house was again moved by angels because of the Muslim invasion of Albania. It landed first in Recanti, Italy, but was shortly thereafter moved for a third time to its present location in Loreto. (BL)

Today we will be transferred to Saint Peter’s Basilica in time to attend the Sunday 10:30 Mass followed by the Ubi Orbi, the Holy Father’s Blessing in the Square at noon. .The afternoon is free to explore Rome further on your own. Meals also will be on your own. Half day excursions can be recommended and booked for you. An Optional Full Day Excursion, destination, to be announced, can be made available for those interested. Overnight will be in Rome. (B) (Optional excursions not included in the price of this itinerary)

Day 9 – Rome/USA We bid a fond farewell to Rome as we depart for Fiumecino International Airport for our voyage back to the USA arriving home in the afternoon. Meals aloft.